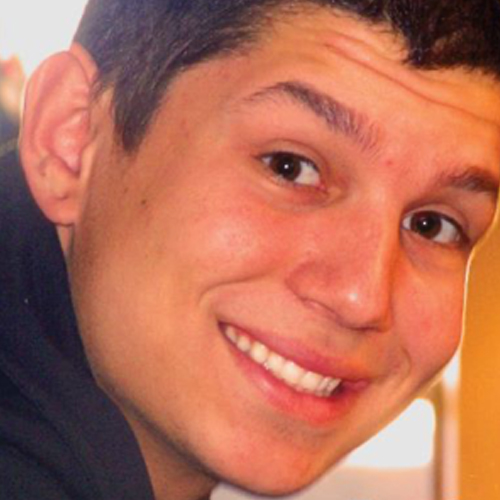 Eric had a profound and abiding love and respect for people with special needs. He often spoke out against stereotypes, prejudice, and negative attitudes towards them.

Eric was an adventurous soul. He loved our family camping trips and our beach vacations. His absolute greatest joy was spending time with his family and especially his brother, Joey. Enjoying the outdoors, enjoying the sun, playing a little volleyball, sitting around the campfire dancing the famous Gouveia “Rice not Ice” dance. Wow – and the cousins – Grady, Abbie, Samantha, Kara, Marc, Gina, David, Ben, Cole, Haley, Carmela – they were as close as cousins could be.

The most important people in Eric’s life were his brothers, Joey and Robby. They shared bedrooms, they shared hopes and dreams, they shared their fears. Joey and Eric were the best of buddies and Eric was ever so protective of Joey as they went through grade school together.

Eric had an incredible wit and intellect. He found joy in having philosophical discussions, delving into the world of politics, discussions over the rights and the wrongs of the world, and discussions of religion and humanity. He loved to tinker on the piano. He had a quirky humor and a unique perspective on life.

He said that something was happening to his brain, he said he didn’t feel right.

On February 24th, Eric had called me to talk. As we talked, he said that something was happening to his brain, he said he didn’t feel right. On Friday, February 26th, 2016, I exchanged multiple text messages with Eric. We had agreed that I would come by on Saturday and we would go to breakfast – Saturday, February 27th. On Saturday morning, I called him but did not get an answer. At that moment, I knew something was wrong. I kept calling, and texting, and threatening that I needed him to pick up the phone, but to no avail. I got in my car and drove to his apartment. I had a key, when I walked in, I saw him hanging – he had been there for 10 hours. He had a note by his side, “I hope that Jesus can save me now.”

Because of the rise in suicides, the time has come for society to seriously address this by providing additional funding for suicide prevention. More education is needed and more funding for prevention research is needed. Currently, mental health research receives a very small amount of funding in the overall NIH mental health budget. More research is needed to identify risk factors along with the development of tools to identify people at risk.

In addition, suicide is so stigmatized in our society today. People are not willing to talk about it openly. Without open talk, people can’t get the help that they need. Fear of social rejection, ridicule, discrimination, and judgment often keep people from sharing their struggles. If people felt comfortable talking about their mental health struggles and if the communities were better able to support them, we could see a marked reduction in the number of suicides.